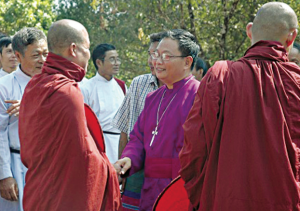 I decided to tear a strip off my longyi and hang myself. Prison had broken me. Torture petrified me. Cruelty depressed me. Why do human beings oppress and torment each other? I was a Christian leader and Bible teacher. My heart trusted God but my mind was full of doubt. I had lost hope. It was time to die.

I had always intended to be a priest. I was born in a Karen village on the vast Irrawaddy Delta. As a child I loved singing choruses and learning about Jesus and I admired our archdeacon’s flowing robes.

When I was four years old fighting broke out and I was sent to Yangon for protection and schooling. As my family was poor the Burmese Air Force was my only prospect of gaining a tertiary degree.

In 1982, when I was 24 and close to completing my training as an Air Force engineer, I was arrested. I was accused of being a spy and sentenced to death. I had no idea why this was happening.

Every morning, cells would be opened and prisoners were taken. They were never seen again. When a voice cried out we assumed someone was being hanged.

I opened my eyes and I saw a tiny cross coming towards me. I tried to catch it, but it flew away. Again I tried to catch it, and again it eluded me. It became bigger and faster. As soon as I caught it, I fainted and fell into a deep pit. When I hit the bottom I was enveloped in light. I heard a very soft voice say, “My son, I am with you always.”

I woke suddenly. The doubt in my mind had gone. I shouted, “My God is real! God is with us!” The guards threatened to kill me, but an officer said, “Don’t worry, he’s mad!”

A prisoner started singing a Christmas carol. Others joined in; Communists, Buddhists, everyone! A Korean started singing in his own language. Then a Baptist pastor began preaching. Others sang Karen songs. I was so happy. I was no longer afraid of dying.

Please pray that English and Burmese editions of a biography of Archbishop Stephen will reinforce his leadership and inspire his people as he guides them through this time of transition.

The Most Reverend Stephen Than Myint Oo is the Archbishop of the Church of the Province of Myanmar.

Adapted from Dancing with Angels by Alan Nichols.

$5,000 will finance the publication in Yangon of the Burmese edition of the biography Dancing with Angels.