You can’t please everyone

You can’t please everyone 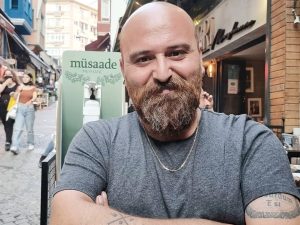 Sezai contacted us online in 2019. He subscribed to Miras magazine and requested a copy of our book Voice of the Martyrs. He was unsure and afraid.

Sezai is from Artvin, a city on the Black Sea. Like many families in Turkey, Sezai’s family is half atheist and half Muslim. The conflict was tearing them apart. Sezai belonged to the part that held that there is no god.

One day Sezai was surprised by a call from his elderly Muslim grandfather who asked for help walking to the hospital. Not far into the walk, the grandfather wanted to sit down to rest and took the opportunity to talk frankly about faith and the family tradition. He said he wanted to save Sezai’s soul and gave him a book about Islam.

Sezai felt uneasy. He knew his unbelieving relatives would be very angry if they knew about this conversation.

A season of sowing

After a few days reading the book, Sezai began to feel that Islam offered a solution to the suffering in this world. He found in Islam strong conviction for his heart. Sezai accepted more books from his grandfather and began to practise Islam in secret.

It was while reading his grandfather’s books that Sezai first encountered the Christian faith. The curses and condemnation directed at this false religion aroused something contrary in his heart. A seed of curiosity had been planted.

All these new ideas and secrecy were creating chaos in Sezai’s mind. He felt empty and adrift. His studies were going badly and some members of his family started to ask questions. Sezai decided to leave them and his ­grandfather behind in Artvin and move to his sister’s house in another city.

A season of reaping

Sezai studied the life of Jesus. What he discovered shocked him. Jesus was different. His actions and teaching were straight and graceful. Sezai found Miras on Facebook and wrote to us. The first magazine we sent him explains what the Bible teaches about God’s nature. He read more issues online and asked us hundreds of questions. After a year of investigation, Sezai gave his heart to the Lord. We prayed together online and praised God. Now he is waiting to be baptised.

This story fills our hearts with joy and our eyes with tears.

For years I have served as an evangelist in different Turkish cities. I know that people want gospel resources that are well-written and well-designed. Miras magazine has been tried and tested. This is more than just a publishing ministry. We work to spread the gospel.

Please pray that our desire will not be quenched.

Your prayers and support make stories like this a reality. Will you stand with us?

Gökhan Talas is the founding director of Miras magazine. Miras means “inheritance” — because Turkey was home to the first gentile churches.

$10,000 will make possible the publication of Miras magazine in Turkish, Persian and Arabic.