We Will Sing to the Lord a New Song

We Will Sing to the Lord a New Song 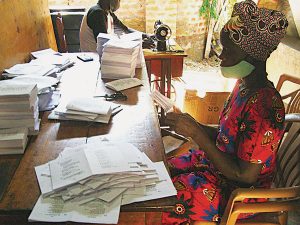 I was born in Panawac, a remote village in Pacong County. My tribe is Dinka, my clan is Agaar. We are a stubborn, unforgiving and hostile people.

During the rainy season I looked after the goats and worked in our garden to grow food. In the dry season when the village pasture had been eaten, I became a nomad and roamed and camped with the cattle.

I was fourteen years old and already bore the ritual scars of manhood on my forehead when a primary school was opened in Panawac. Our lessons were in Arabic.

I want to read

One Sunday, my cousin invited me to go to church in a nearby town. A young girl stood in front of the congregation and read aloud from a Dinka Bible. I was stunned and hot with shame. I wanted to learn to read in my mother tongue so that I too could read the Bible like that girl.

After the service I asked my cousin, “Where is the school of Dinka language?” My cousin took advantage of my desperation. He offered to introduce me to a Dinka teacher on the condition that I agree to go to church every Sunday, attend catechism classes two afternoons a week, walk wherever he walked and do whatever he told me to do. This is how I became a Christian.

After school a wise old man called Petero Awan Kuac used the Dinka Book of Common Prayer to teach us both the Dinka language and the catechism.

I want to teach

In Khartoum in 1991 I graduated with a degree from the Faculty of Education at Wadi El-Nil (Nile Valley) University and was ordained a deacon. I began to write, edit and translate books in order to teach evangelists, lay leaders and Sunday school teachers how to read and write, and help our communities resist Islam.

I married Rebeca Agel Job Majak and God has blessed us with six children: three boys and three girls. We also care for another seven children. They can all read and write.

Before the civil war in the 1980s, Christianity was largely confined to the towns and cities. Christians fleeing the fighting took the gospel to every corner of the Lakes States. Dinka-speaking Christians transmit their faith through liturgy and song. During this revival many songs were composed to evangelise, instruct and encourage the people.

In 2010, I was made Bishop of Cueibet. This diocese now includes all of Gok State. We continue to use liturgy and hymns to bring literacy and the gospel to neglected people and build up village churches. Will you help us compile and print a new hymnbook?

$5,000 will enable the Sudan Literature Centre in Arua, Uganda, to test and publish a Dinka Agaar hymnbook.